When i first heard about the Husqvarna T536 battery powered chainsaw i laughed it off as a joke and i didn’t even give it a chance. It reminded me of one of those plastic toy chainsaws you see every 2nd kid playing with or something your next door neighbour would pull out with his ladder on a sunday after a trip to Bunnings, definitely not something a professional Arborist would use..

Boy was i wrong! This saw is a little beast. It’s light weight, quite and cuts though small branches like a Stihl 201T.

Would I use it to remove a tree or cut branches 12 inch diameter plus?  NO. We still prefer our Stihls for large tree work but this Husky T536 has a place in our company 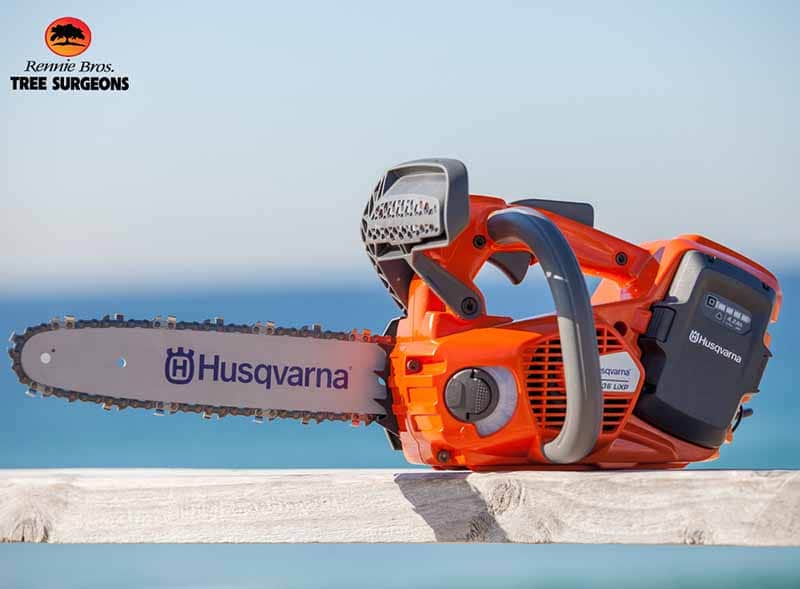 The batteries take approximately 20-30 minutes to charge and will give you a 2-3 hour usage on a general trimming job. We use it mainly in our EWP for dead wooding and trimming small to medium trees. For removals or large branches we go straight for our Stihl 201T as the T536 will struggle on large timber.

Where this saw really shines is after hours emergency tree work. We no longer need to annoy all the neighbours starting a petrol powered chain saw at 1am to remove a hanging branch. We’ve also had to prune branches next to tree hollows and birds nests and this is a great way not to disturb the wildlife. Its so quite you could use it without earmuffs (not recommended) and its pleasant not having it hanging on your saw strap running non stop like a petrol chainsaw

It can get a little confusing to start though as its press a button to turn on and hold the trigger to run. The first few weeks you find yourself reaching for the pull cord that doesn’t exist.

It also feels slightly more dangerous too, due to it appearing less dangerous if you know what I mean… a dead silent saw that can turn deadly at a press of a trigger… Compared to a petrol saw being loud and vibrates makes you more aware!